In this part of our betting strategies series we talk about one of the most popular Betfair strategy, the Lay the Draw.

What Is Lay the Draw?

As we said in the introduction, lay the draw is one of the most known strategy, but If you haven’t heard about it, we explain it now. First, and foremost this can be used only on betting exchanges, like Betfair, Betdaq, Smarkets or Matchbook.

The LTD strategy is favored by many traders, especially beginners due to it’s simplicity. Basically you enter a match before kick-off, or when the score is draw with the expectation of one more goal. Your first bet will be a lay on the draw,  which means you bet against the draw. When a goal is scored, the odds of draw will increase, so you place a second bet to back the draw. By doing so,  you generated healthy profit. Due to the nature of this trading strategy the later the goal comes, the more significant profit you can take from lay the draw.

Sounds good, right? – It does, but it’s not that simple. Let’s talk about the potential entry points of lay the draw strategy!

Lay The Draw Before the Kick-Off

This is something we wouldn’t recommend usually. The main disadvantage of this entry point is that you will usually lay at high odds, at least 3.30, often a lot higher. The higher the odds you lay, the smaller profit you can realize when someone scores. If you lay the draw before kick-off, there are certain scenarios, where you’ll find yourself in a very awkward spot. This can be because the underdog scored – in this case, sometimes the odds for the draw won’t be higher, but even lower! Also, sometimes the goal comes too early, which will hurt your potential profit.

Lay The Draw At Halftime

This entry point is a lot more reasonable, but you still lay at higher odds, definitely above 2.40. Additionally, there is only 45 minutes  left to play, which is a significant factor in this spot.

Many bettors/traders forgot about the time already elapsed. Just because you trade the match of a high scoring team, it doesn’t mean that there will be a goal. Make sure you don’t forget the fact that 45 minutes have already gone from the 90 when you plan to lay the draw!

To highlight the importance of this, we made quick research in our database, where we considered matches that have played after the 1st of July 2018. In the examples, we focused on 0-0 draws, as you might have heard many times someone saying: this game can’t finish with 0-0.

Here Is a Shocking Example

The Dutch Eredivisie has become famous about its high scoring games, so we picked a team which plays 0-0 close to the average. This team is PEC Zwolle, which played 22 games at home with a goal average of 3.91, and only 9% of their games ended with 0-0 (2 matches). It’s interesting to see that the remaining 20 games all had at least one goal in the first half. In those two instances, where the HT score was 0-0, the match also ended with 0-0.

Let’s Take a Look At The Opposite Of The Spectrum

Japanese J1 League side, Tokyo FC plays very low scoring games at home, with an average of 2.21 goals. This team also played 0-0 just as often as the average team in our database, 8.3% of the time (2/24). Interesting fact, that the scoreboard showed 0-0 16 times at halftime, but we have seen at least one goal in 14 instances.

If you would like to get more information on what are the best leagues to use this strategy, click here for an in-depth analysis.

Blindly apply the lay the draw strategy on high scoring teams is far away from optimal. You need to pick the right match with the right teams which will be very often a low scoring one.

Now, ask yourself where would you apply the Lay the Draw trading strategy? If you picked the second example, you’re right. Not only because you can win more often, but you can also win a lot more, as the market expects more goals from Zwolle’s home games than Tokyo’s ones.

Thanks to the Goalstatistics Daily Football Data Spreadsheets, these situational statistics are delivered to you every single day, for every single match!

As the game goes on, and the score is still a draw, it’s odds will significantly decrease. Around the 60th minute, most of the times it will be between 1.80-2.30, depending on market expectations. Overall we can say that the principles from the halftime entry point still apply here, but your bet’s risk-reward ratio will be better.

In our database, we found around 15 000 games where the score was a draw, this time we take into consideration non-goalless (e.g. 1-1, etc.) draws too. This is a slightly different aspect of the Lay the Draw betting strategy, but the majority of the games won’t be 0-0 at this stage. All in all, we can say in general, if the score is a draw in the 60th minute, 64% of the time we have seen at least one more goal.

What logic would say, the more goals you can see in a league, the more likely you can see a goal in the last 30 minutes. In general, this statement is true, but as we have seen earlier, it’s not that simple.

If you picked the Dutch match, you’re wrong.

Imagine the odds you get on the draw for the Brazilian game and how bigger odds increase will you see when they score!

The fact is, without significant research, you won’t be able to find this valuable data. Luckily, the Goalstatistics Daily Football Data Spreadsheets deliver this every single day for more than 120 leagues and more than 30 000 matches every single year to use it to prepare a successful lay the draw entry!

In the previous examples, we analyzed „fictional” games, so it’s time to show how Goalstatistics Daily Football Data Sheets work in practice.

On the 1st of November in 2019, we had 95 matches in our sheet, we navigated to the 60th Minute – In-Play tab, and filtered our table to games only, where the team tendencies showed at least one goal after the 60th minute well above the league average. To do this, we just need to filter to green colors, like this:

Overall, the number of available games is quite limited, thanks to the lower number of matches on a usual Friday. We still can see a couple of good options to apply the lay the draw strategy, as 11 games passed our filters, but we must get rid of low sample sizes.

These Are The Games We Have To Consider

The Bolivian game got postponed, so it’s an instant no. Galatasaray and Viitorul are heavy home favorites, so even if we could enter, we would lay at a quite high price. This leaves us only two options, Numancia and Academia Cantolao. As the latter scored twice in the first half, we must have forgotten that game too.

Let’s take a look at Numancia-Albacete! The home team had 7 home games, the away team had 11 away games in the past calendar year in this situation. Compared to the league average of 62%, there was at least one more goal in 71 and 82% of the time. To make sure that the team trends did not change in this season, we take a look at the season to date stats. It has confirmed this match is a strong candidate when metrics are high enough, you can apply the lay the draw strategy. And the result? 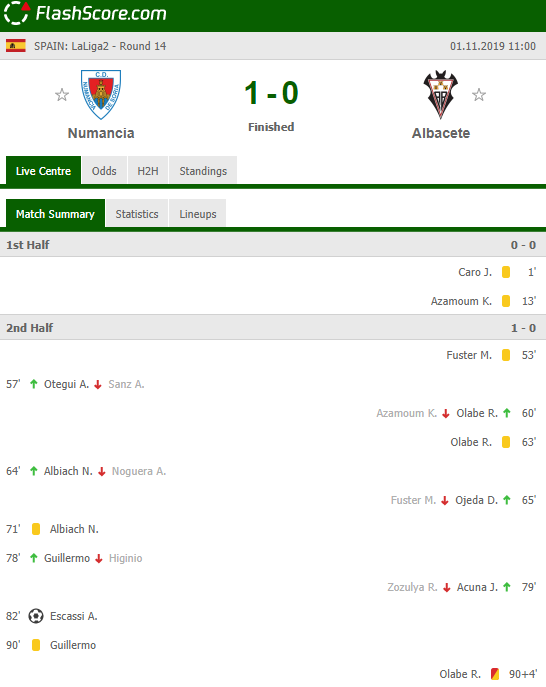 If we scroll a bit left in our spreadsheet, we can see the Any scored between 61-75th Minute tab. Numancia’s matches where the score was a draw in the 60th minute only seen a goal before the 75th minute in only 14%. On the other hand, Albacete’s 11 games produced a goal between the 61st and 75th minute in 64% of the time. Although these stats oppose each other, you can see the league average is only 31%.

In this situation, so you can decide between two options:

If you decide to take the second option, you will win a lot more with a late goal, but if a goal comes early, you will win less. The more experienced you become, the easier decisions you will make in these situations! Last, but not least, on the 75th Minute – In-Play tab you can also check how these teams perform in the last 15 minutes of a game when the score is a draw. Apparently lay the draw is a viable option, even this late into the match!

All in all, you can create your own trading plan or your own shortlist within couple of minutes on any day and you can enter lay the draw trades with confidence! Don’t forget, Lay the draw is just one out of many trading strategies that are supported by more than 100 situational statistics for every single match, every single day.