It was quite difficult to decide which game we pick to analyse this Friday, as in general it’s quite hard to find value today. In the end, we choose the Sandhausen-Heidenheim match from the 21st round of the Bundesliga 2.Let’s see our football trading plan for this one!

Heidenheim is fighting for the promotion, but they are yet to win this spring, as they’ve lost against Stuttgart and played draw against the dead last Dresden. Sandhausen sits in the middle of the table, in 2020 they managed to beat Osnabruck, but then lost to Nurnberg.

Looking at the pre-match stats, these two teams sits at league average in many categories. Couple of things stands out, for example the fact that Sandhausen lost only one game at home this season. Another interesting fact is that Heidenheim couldn’t score a single goal in the first half of their away games this season, and conceded only one.

It’s hard to see a value bet before the kick-off, if you really want to jump on something, we think it should be a halftime 3-way bet, but don’t forget, there should be a couple of good options when it comes to live betting.

As we said earlier, Heidenheim’s away matches haven’t seen too many goals in the first half this season, and this is the stat that determines our approach to this one.

If the score is 0-0 around the 30th minute, we think it’s a good idea to jump on halftime 0-0 or under 0.5, maybe scalping full time under 1.5 or 2.5. The thing is these teams can’t really produce goals in the last 15 minutes of the first half, especially in this situation. The league average for over 0.5 first half goals when the score is 0-0 in the 30th minute is 36%. Compared to this, Sandhausen’s 20% and Heidenheim 29% is really-really poor. Not to mention that first time these teams clashed in this season, score at the halftime was 0-0. 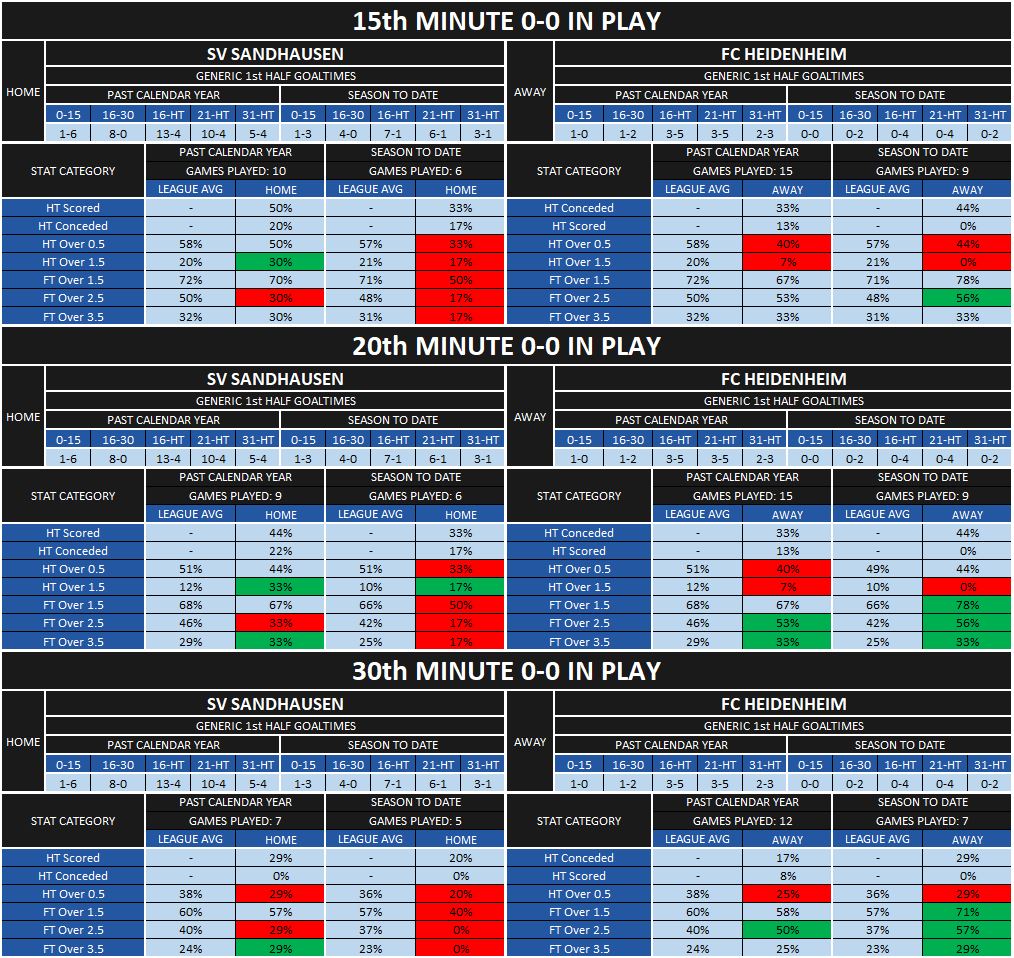 Okay, if – for some reason – the halftime is not 0-0, but a home lead, you can expect something from the away side.

When leading at home at the break, Sandhausen always conceded a goal this season, while scored only 25% of the times, being outscored 1-4 in this situation. On the other hand, Heidenheim scored 75% of the times, but please note they also tend to concede.

If you like this option, you can also wait, as there are not too many goals between the 46th and 60th minute in this scenario. 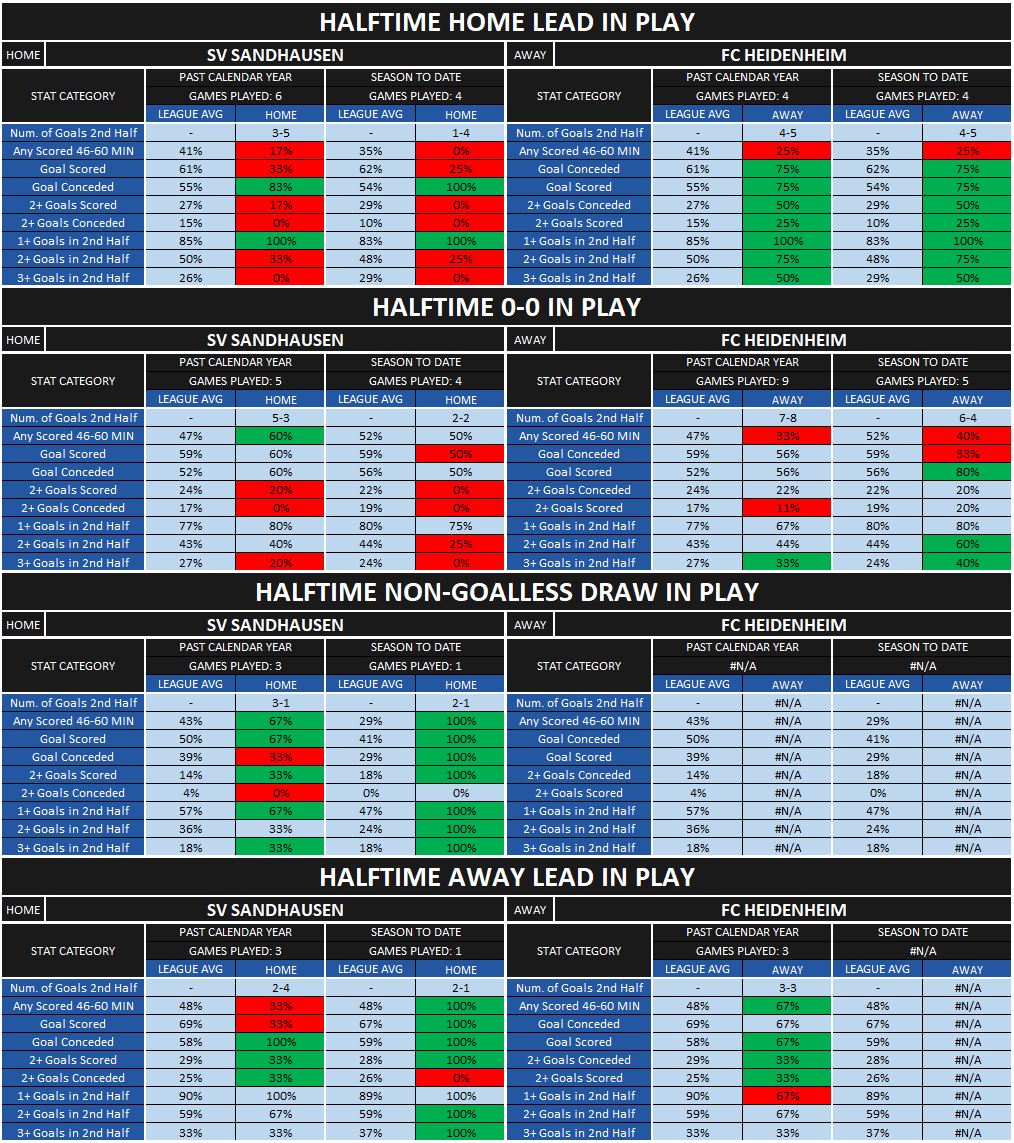 This is one of the most interesting spot in our football trading plan. As we said if you want to lay a 1-goal Sandhausen lead at halftime, you can wait for a better price and a better entry point.

This should arrive at around the 60th minute. When Sandhausen got the lead at this point, they are 1-5 in goals, conceded 83% of the times and scored only in 17%. Heidenheim goal scoring tendecy is quite appealing at 80%, but still, they tend to concede as well. All in all, they outscored their opponents 7-5 in 5 games when they were losing at this point.

If you trade this match, a Sandhausen lay is something you might want to do. On the other hand, if Heidenheim couldn’t score yet, it might be better to take BTTS (be careful with liquidity…) – or simple go to a normal bookmaker and take away team over x+0.5 goals or BTTS. 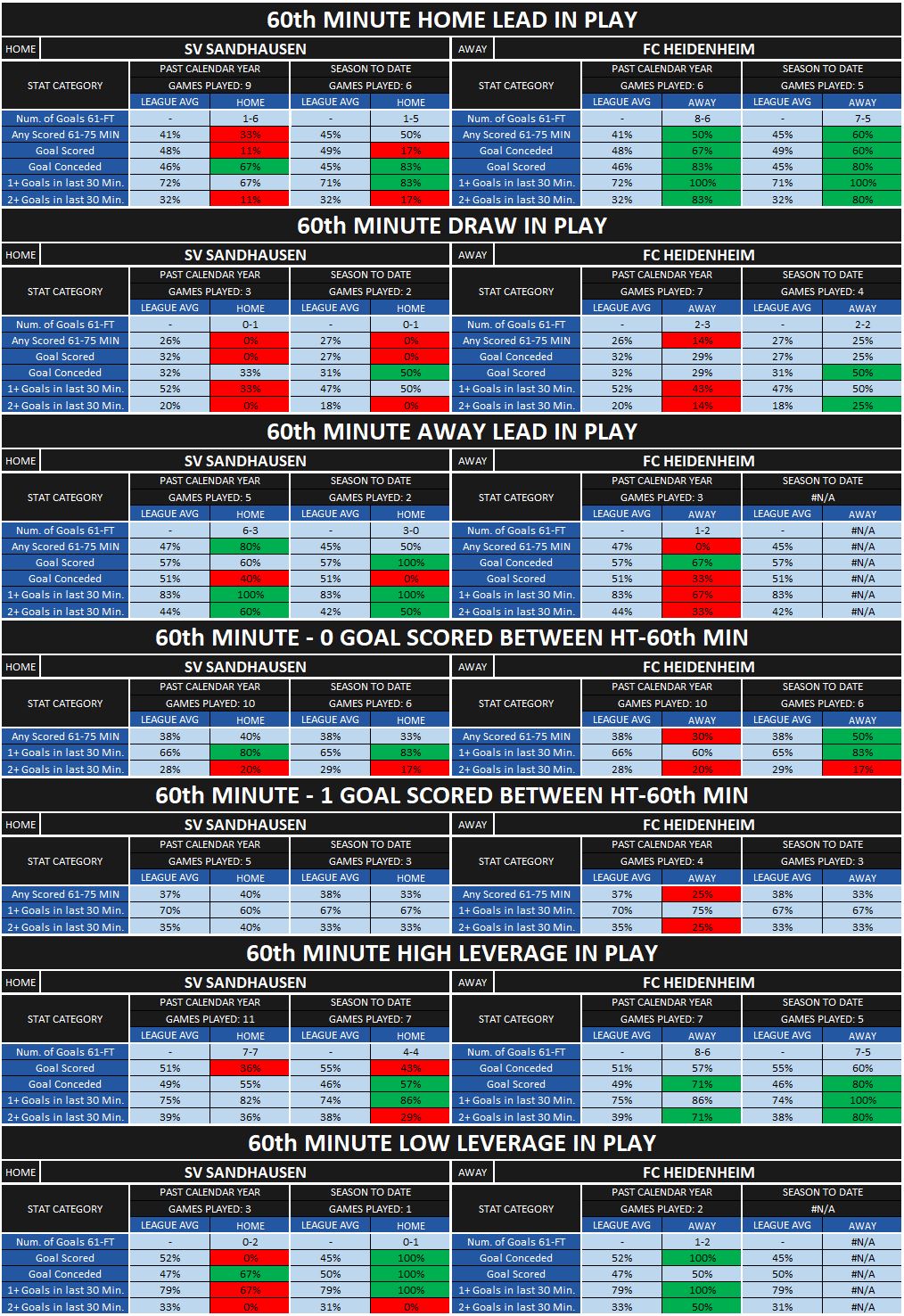 We won’t change too much our trading plan around the 75th Minute. If home team still has the lead, a goal in the last 15 minute is quite possible (Heidenheim’s 5 away games with this scenario produced at least one goal 100% of the times). The only thing why we would be a bit careful in this spot (especially if we have entered the markets earlier) is the fact that Sandhausen couldn’t score in this spot this season.

Another option is to lay the draw, as even that late in the game these teams can produce goals at a 50% rate which is significantly higher than the 36% league average. 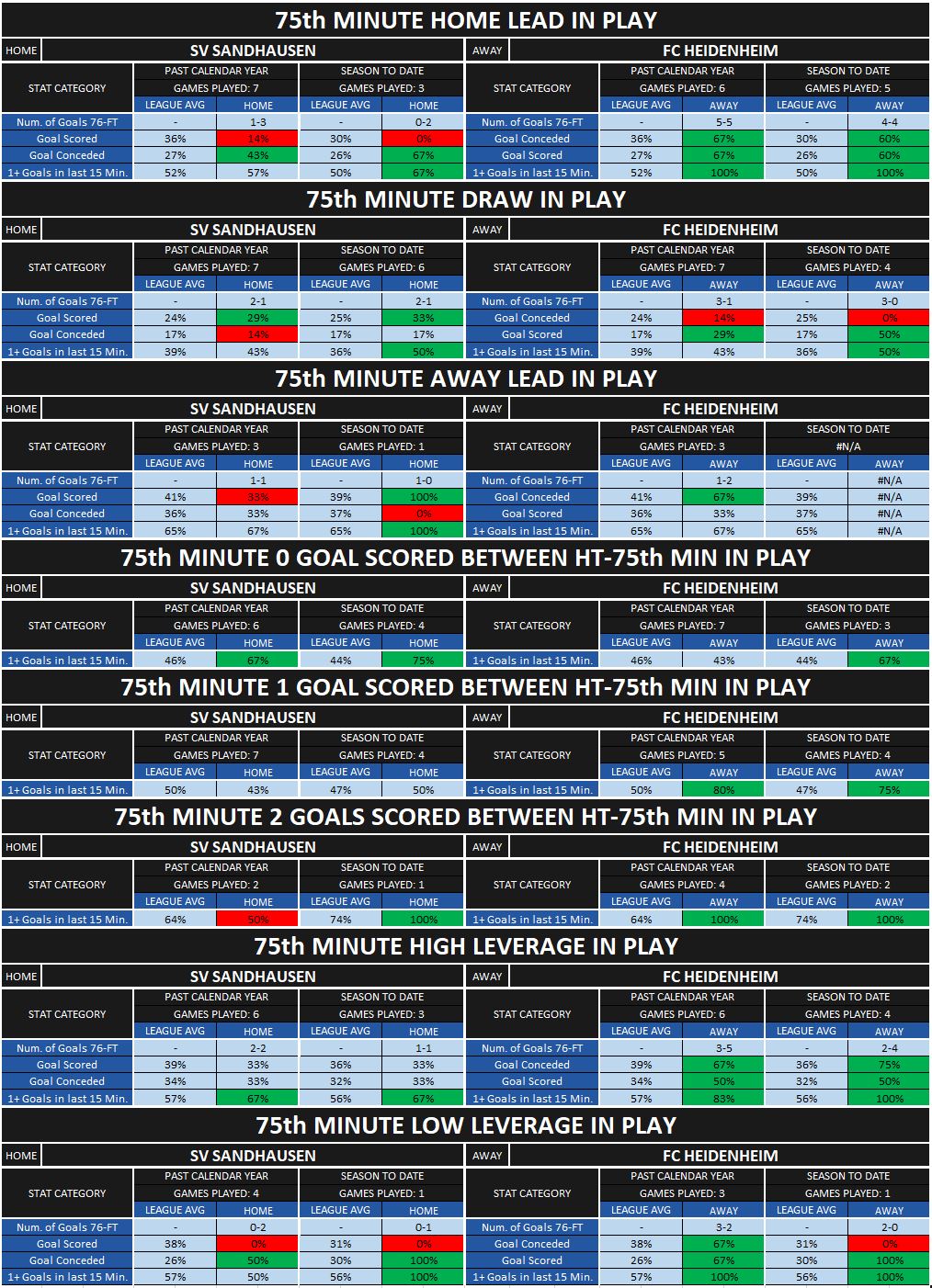 This game, and in general this day is not easy. As we always say, make sure you watch the game and only trade these spots if the game play support it. First half under is definitely an option, but the best case is a slight home lead at the break, then you can target a Heidenheim goal.