In the last match of the 20th round of Bundesliga 2 Bochum will host Hamburg on Monday evening. The home side is fighting against relegation, while HSV could get back to the second place on the table if they secure the 3 points.

Looking at the prematch stats, the only thing stands out is the BTS tendency. If you would have bet on BTS on Bochum home games, now you could have 9 winners out of 10, but this option was right 8/10 of HSV’s away matches. Unfortunately, there is a huge red flag, as these team’s last three meetings produced only one goal. Not to mention, the odds for BTS sits as low as 1.60, so it is better to skip this one.

If you want to take a higher odds, halftime over 1.5 is definitely an option at around 2.50, but again, the H2H doesn’t support this.

You should definitely expect goal(s) in the first half in this one, but when you look at the stats, it is quite difficult to find the best entry point when you create your football trading plan.

In general, games for both teams have seen goal(s) in the first half this season at quite a decent rate (70% for Bochum and 90% for Hamburg). On the other hand, if you look at the stats, goals in the 1st half tends to come early, in the first 15 minutes for Bochum. In those games where the score was 0-0 in the 20th minute the halftime was also 0-0.

Hamburg is slightly different, as their games rarely see an early goal, but 4 times out of 5 there was at least one goal before halftime in their away games this season, when the score was 0-0 in the 20th minute.

All in all, we would rather skip these entries, unless there are tons of chances. 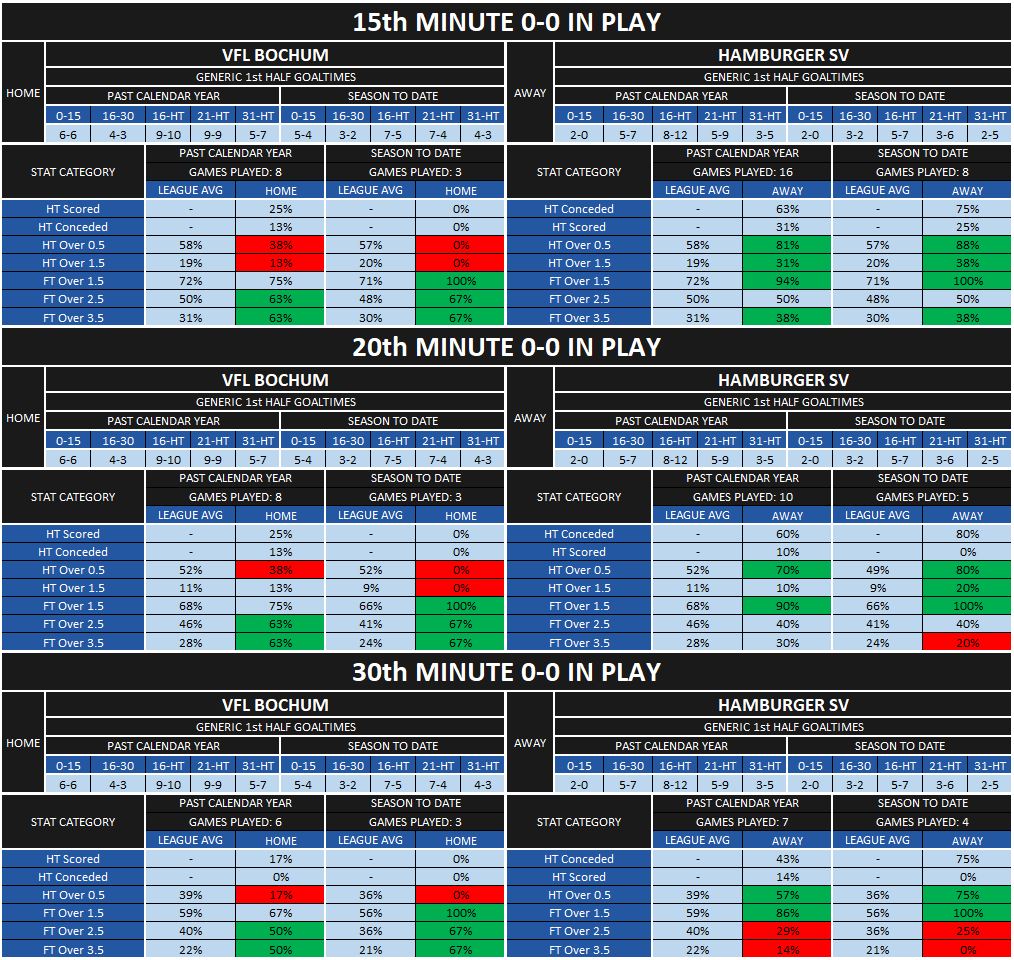 When it comes to halftime, the best case scenario is a Bochum lead. If the home side has the lead before the break, they can’t really score (0 goals in 4 games in this season), while they always concede. On the other hand, Hamburg plays very well when they are behind at halftime, scored at least one goal in 4 games out of 5 in this situation. Last, but not least, Bochum’s goal ratio in this situation is 0-4 at home, while Hamburg outscored their opponents 5-2 away from home. All in all, this could be a decent point where you want to lay Bochum. 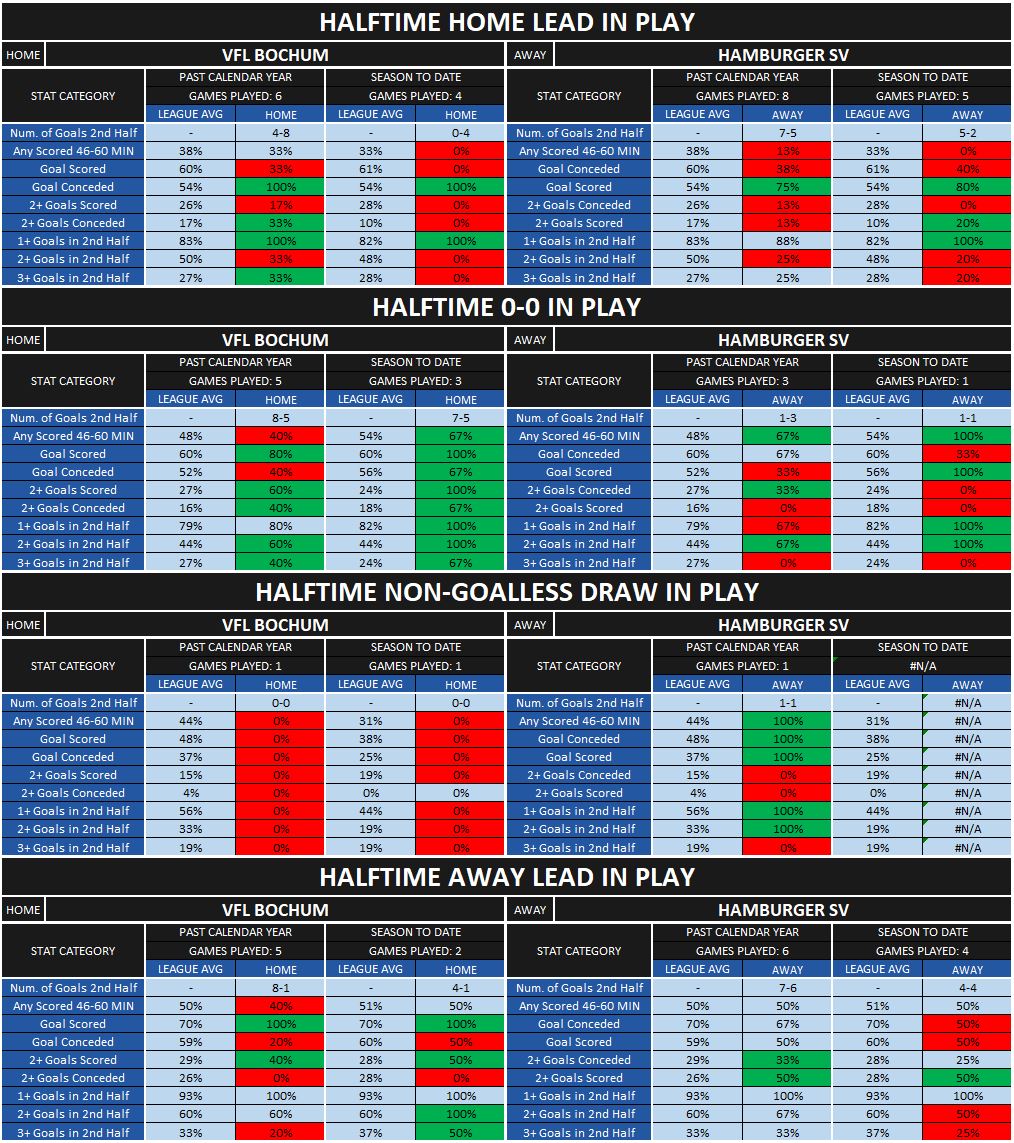 In case Hamburg has the lead, there is a good entry point in our football trading point around the 60th minute.You can target a time interval trade / bet for a goal between the 61st and 75th minute, but there is a better option.

You’ll get very decent odds on over x+1.5 by this time, and the stats are amazing: Bochum had 4 games this season when they were losing at this point, and all of them produced at least 2 more goals. On the other hand, HSV had 3 matches when they had the lead and 2 of them have seen 2 or more goals. Checking the number of goals in these matches, Bochum is 8-3 in just 4 games, while Hamburg is 4-3 in 3 instances.

Looking at the leverage stats, we prefer a match with low leverage (at least 2 goals difference between the sides), as the teams are more productive in this scenario. 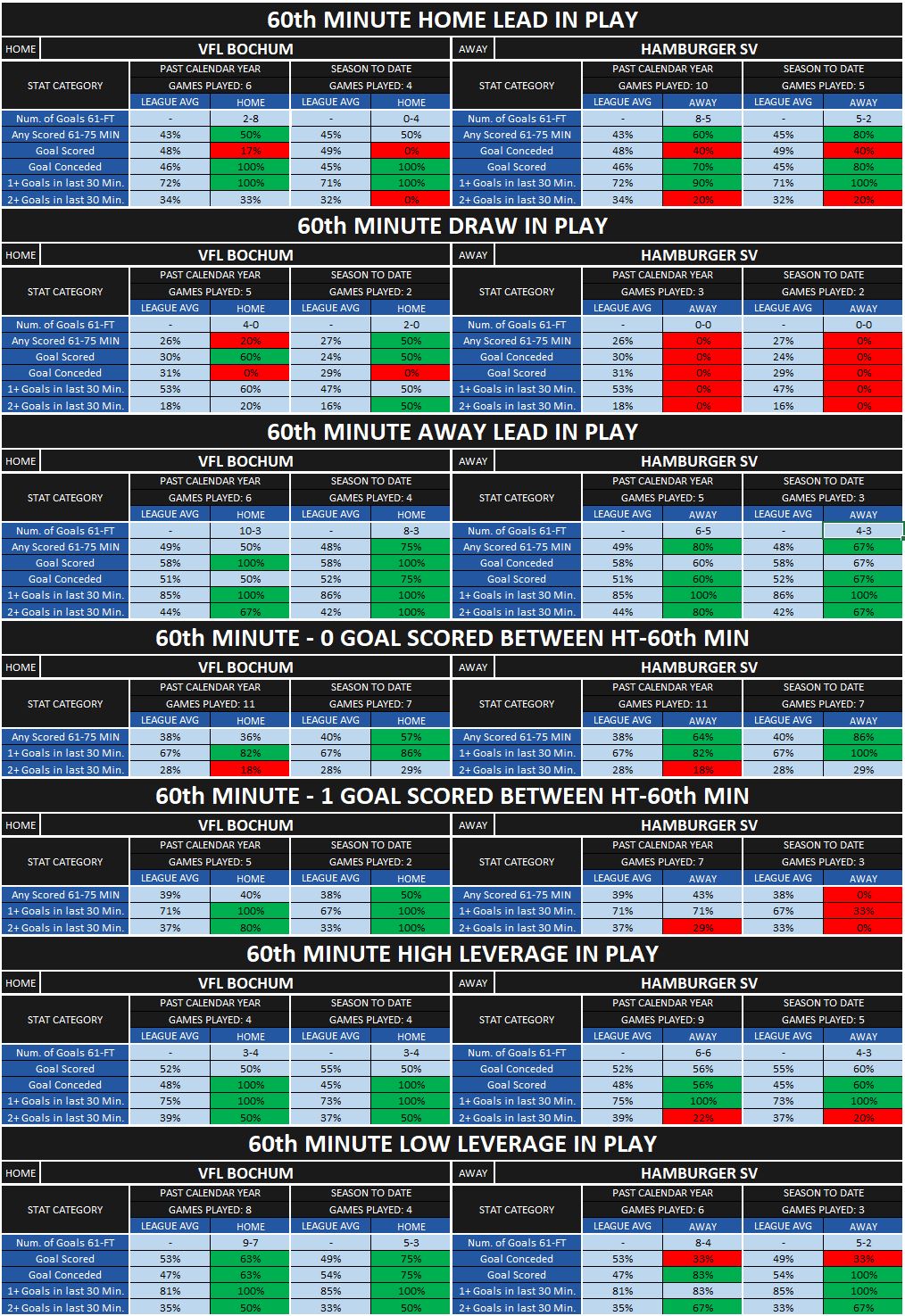 Just as we did around the 60th minute, we would prefer an away lead at this point of the match. The last entry in our football trading plan would be a bet on over x+0.5 goals for the last 15 minutes. The reason is quite simple, both teams had 4 games in this situation, and all of them produced at least one more goal by the final whistle (in fact, Bochum is 7-1 in 4 games, Hamburg is 2-4 in 4 matches). In this spot, high leverage shows better strike rate, so make sure you keep an eye on this too.

Last, but not least, if Hamburg leads by exactly one goal, you can also consider going against them. 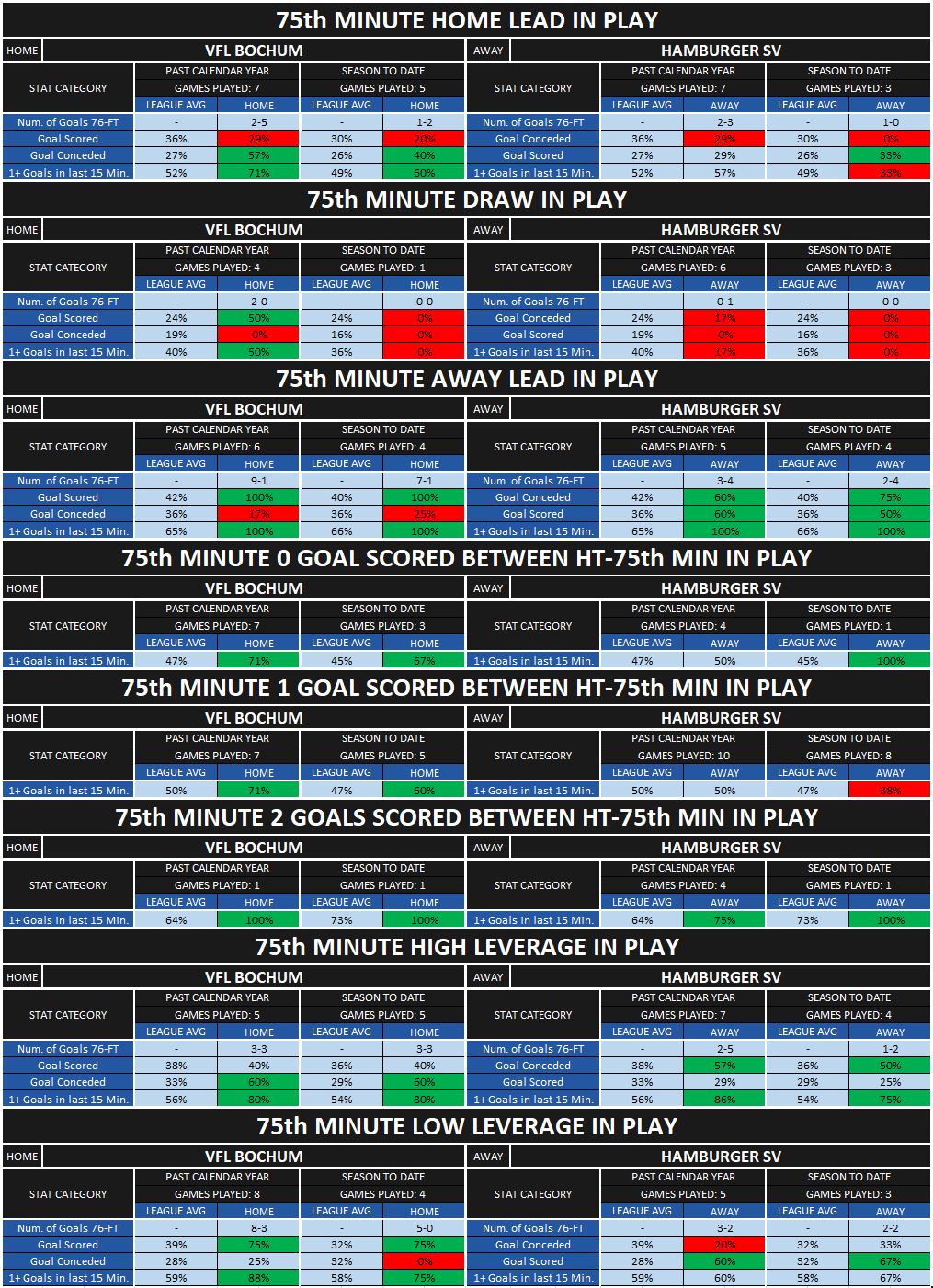 The best thing you can do with this game is trading the second half, as the opportunities look a lot better compared to prematch or 1st half entry points. As we said, the H2H is a decent red flag, so make sure you watch the game, and enter only if the overall picture of the match support our ideas.